Here is the first Monday where I will share with you some artwork that I did last year. Most of it will be from Inktober but there will be a few outside of that. Hope you enjoy!!!!!!! Inktober 1: This is one of my personal […]

Monday gets a bad rap these days. You spend all week working your butts off, then the inviting weekend commences, only to have it crushed by going back to the reality of work… Again. The only exception is if you enjoy doing what you do. […]

When Karen saw the Little One painting, early in November 2017, she inquired if I’d be able to do one from a cell phone photo. Karen later showed me which photo she had in mind for me to paint of her cat. It was quite the photo. Both ears were cropped out of the photo, along with the side of his body. It was fuzzy and extremely flashed right on his face. You could barely make out the lines in the pupils of his eyes. The colors seemed a little bit much on the warm side, so I cooled it up a bit in Photoshop. I really wanted to bring out the blacks in his coat. The bottom photo was the original one Karen sent. The top is the one I edited. This was going to be a challenge.

Jason was a very loved, almost 18 year old, long haired black cat, bottle fed and raised by his humans. He had recently been diagnosed with adenocarcinoma, a form of cancer. He had surgery a few months ago to remove part of the tumor. It was a success and he is doing well. His swallowing is much easier now. Karen’s husband, John, was particularly bonded with Jason. She thought it would be a great idea to give him a painting, for Christmas, of his little boy cat.

I asked if she could take a few more photos of Jason, to get a better idea of what he looks like. But I soon learned that not everyone is very good with the cameras… 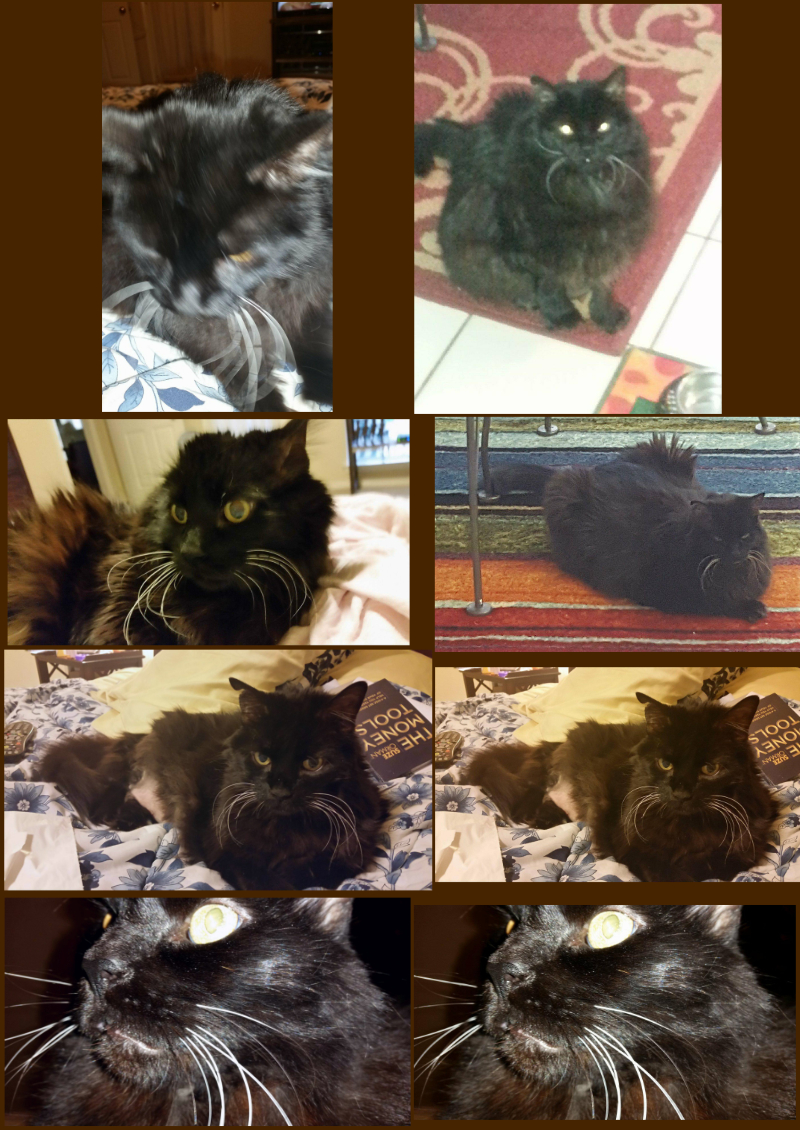 Still, it did give me a better idea of what his body built and shape was like. There are two photos that are doubled, but that is because I changed the color tone a little bit for when I was ready to paint. The versions on the left are actually the edited ones I made. They are crisper and vibrant in detail and color. You’ll see in one photo (second to last photo row), he looks like he has a clipped ear. Someone once thought he was a stray and clipped him. Vets clip stray cats’ ears to let others know if a cat is spayed or neutered. Karen wanted me to keep his ears whole in the painting. In the original photo, his ears are missing, so, judging by these other photos of him, I had to find another cat online with similar looking ears and facial profile. And since she could see his eyes better than I could, I requested Karen to find a similar looking black cat with eyes that look just like his on the net. In the end, I had multiple reference photos of Jason, along with reference photos of Jason lookalikes.

After receiving and researching all of that information, I set to work on drawing the line art of Jason. I did two versions of it. One with more dilated pupils like in my reference photo of the eyes, and one of thinner pupils like in his original photo. Karen preferred the thinner eye pupils. It had more of his personality in it. I did the drawing part digitally and then printed it out true to size, transferring it onto paper for painting.

I’ve never painted a black cat in watercolor, so I went in search of how other people do it. I found a person on YouTube who showed a sped up process of how to paint a black cat in purely watercolor. I took notes and tested it out a little, but I found it to be more time consuming and I thought: I’ll just do it the way I know is the right way, for me. I think it’s really fun to use different art mediums together to come up with something special.

I learned quite a bit from painting Little One and video recording myself. I had since bought a camcorder and a tripod. This new tripod offered me a lot more flexibility as far as movements and how to situate a camera, or camcorder. I was pretty excited to try recording myself with this new painting, but with a better camera layout. It did feel a little awkward at first, but after awhile, I just got lost in my work and forgot the awkwardness. I wasn’t sure if I’d actually have any good footage to make a video with, but I would worry about that later.

There’s a lot of planning that goes into a painting. Especially if I am working with a very low quality photograph. I want to make sure I represent the personality of the subject as much as I can.

I chose a warm red background to make for another lovely warmth of a painting. I thought leaving it white would not feel very natural. In his reference photos, I noticed that Jason had quite wild and long whiskers. In one photo, it looks like one of his whiskers was flying away from the rest. Apparently it’s a pretty common thing for his whiskers to get crazy haha. So I incorporated that into the painting. I added his name upon request, after Karen saw the finished piece. It was there, but discreet.

Karen and John both had the same reactions when they first saw this painting: “It’s Jason!”. Karen said John was extremely happy with his present 🙂 They gave the painting a beautiful black framed finish that compliments his coat so well:

Over the years,  I used Adobe Premier Pro, which is a video editing software. But with my current laptop, I no longer had access to it, and I really don’t like how Adobe makes you pay a monthly subscription to use their products. I’d rather just pay once and be done with it. Plus their software is so expensive. I’ve had to find alternative programs to use in place of Adobe software that offers just as good capabilities, if not better. When I first got my current laptop, I was using a fairly simple video editing software called iSkysoft Video Editor. But I found it to be pretty limiting to what I had plans to do in the future. Last summer I did some alternative software research and came across HitFilm. HitFilm is a free video editing and VFX (visual effects) software that offers paid add-ons for more video editing capabilities. Until now, I’ve used it to create videos of Rain. I still had to figure out how to speed up clips. I couldn’t have a 9 hour video! The solution turned out to be much simpler than I initially thought. I really was unsure how a sped up video clip would look from 9 hours to about 14 minutes. I’ve never done it before, so it was an interesting process. For me, the hardest part was finding the right music. I tried going by way of commercial free music, but nothing I came across felt right. So I went back to my own collection of music accumulated over the years. As soon as I heard these two songs together, I knew I hit jackpot. It’s starts off unsure of where I’m going to go. How will it look? By the time you get to the second song, you can’t help but get excited. …Well, that’s how I take it anyways. It took about two weeks to complete. How do you like it? Should I make more videos like this for future artwork? I admit, it’s a lot more fun to watch an art video like this, rather than a photo slideshow.

Something else came out of this. One thing artists tend to struggle with is how much to charge people. You don’t want to charge people too much, but you also don’t want to charge too little. It can be hard to find that balance at times. So far, I’ve been charging $10 per hour, which is usually around $100-$250. It’s what I’ve read to be a good starting point when an artist first begins doing commissioned works. When I showed Karen the finished piece, and told her the price, she brought to my attention that I was charging far too little. She paid about $325 for a different art piece the previous year. And she pointed out that there are artists who charge $500-$1000 per print of their work. I was reading her suggestions and examples, and I just sat there, stunned by what was happening. But not in a bad way. The things running through my head at the time were things like: ‘Really? Is my artwork *that* good?? I should be charging more? Wow…. Someone really understand the value of time and effort that goes into an art piece, or print! Have I progressed that much to be charging more now?’ It was quite a shock to me. I guess I just didn’t think I’d gotten to that point yet. You compare yourself to other artists long enough to think you have much to improve upon, and think: “I’m not there yet.” I try not do to that to much, and if I do, it’s usually not with envy, but with admiration for how good someone is. I want to learn how they do it, so I can see if I can use it in my own artwork. And if I can’t use it in my artwork, that’s okay. If I can, then hopefully the changes are noticeable to people who watch my art over the years.

Well, that was my journey with Jason. It seems like with every commissioned piece I do, I learn something new, which is a great thing, I think.

Here is my very first speed art video. I hope you like it! Let me know what you think 😀 If you can, be sure to watch in HD for a more clearer viewing quality 🙂